Before the week is out I will satisfy this craving that has been building up for weeks now, for Ayam Sio and Acar Awak, with steaming hot white rice and Sambal Belacan on the side. I will make it all and enjoy it, and don’t anyone try to make me feel guilty about indulging.

It is, after all, Chinese New Year and at this time, the Peranakan food of the Straits-born Nyonyas and Babas is the food of the season for me.

If you live in Singapore, there’s no escaping being drawn into the Chinese New Year festive mood, even if you’re not Chinese. So much of it revolves around food that is ready-made, attractively packaged and can go straight from your shopping bag to the table.

For weeks now, people in the office have been taking orders for home-made pineapple tarts, cookies, cakes and savoury snacks. This year I resisted adding my name to the lists because I have been trying to be good. I really can put away 100 good tarts in under a week if I let myself go and believe me, I have, when I used to be bad. Like last year.

But if it’s Chinese New Year, I will feel these pangs for a Peranakan fix. It goes back to my schooldays in Kuala Lumpur, when my hometown was also a place where you could nt help soaking up the Chinese New Year spirit.

Kim Low, who sat next to me in Form One at St John’s Institution, was a Straits-born Chinese, and he invited some of us to his home for New Year lunch.

That was my introduction to the world of Babas and kebaya-clad Nyonyas, and the exceptional pride they take in laying out a spectacular festive spread – a table weighed down by so many pickles, soups, spicy salads, delicate curries and mild sambals, you do not know where to start and, afterwards, how to stop, because it all tastes so good.

Kim’s mother – Madam Lee Soon Moy, who was nicknamed Berat but was just “Auntie” to me – sent me home with a hongbao and two Milo tins filled with her home-made pineapple tarts and melt-in-your-mouth kuih bangkit cookies.

On the top of each tin, she pasted a rectangle of red paper for good luck.

Those fabulous New Year meals became an annual ritual through our secondary school years, and I had my fill of my Peranakan favourites from Auntie’s menu.

I could never get enough of her Ayam Sio. This was chicken like I’d never had before, cooked in a mysterious sweet-sour blend of tamarind, coriander, onions and sugar.

It went perfectly with her Acar Awak, vinegared vegetables drenched in a garlicky chilli sauce with crushed peanuts and sesame seeds.

Even better, and almost impossible to find anywhere, were her pickled green chillis stuffed with sun-dried shredded papaya and dried shrimp.

For years I thought Hati Babi was out of this world, until finding out what went into it made me give it up for life. These are meatballs of chopped liver and minced meat, wrapped in fat and deep-fried. Lethal stuff.

One year, Kim came to my house to show my mother and sister how to make Acar Awak because I had been giving it rave reviews.

I still have the recipe he brought, handwritten on exercise book paper the way his mother dictated it.

The ingredients included “50 cents cabbage, 20 cents cucumber, 10 cents long beans, 10 cents French beans, 5 cents each of green and red chillis”. That was in 1968.

The cooking demonstration was a big success, my family found the acar every bit as good as I’d described, and it became a favourite we made at home numerous times afterwards. 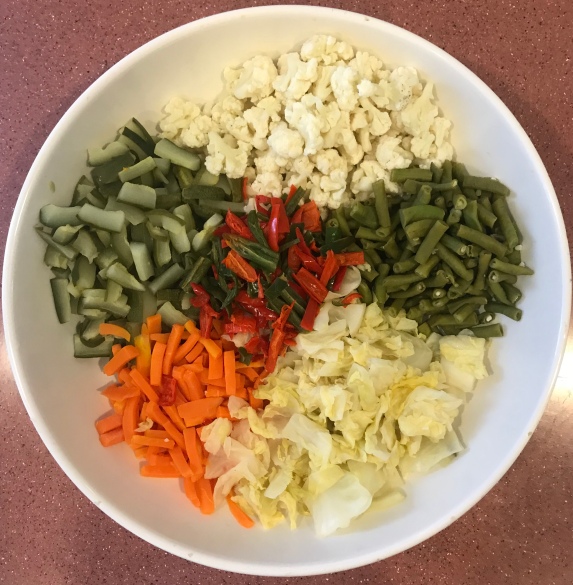 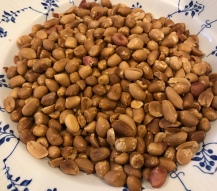 It took me many more years, after Kim moved to Australia and I had come to Singapore, to learn to cook some of those other Peranakan dishes I so enjoyed.

Cooking isn’t hard at all if you have a rough idea of what the finished product should look and taste like, and if you have a decent recipe to help you get there.

Until a year ago the pickled green chillis stuffed with sun-dried papaya remained a dream from long ago. I’d not come across it anywhere, and longed to have it again.

“Mrs Lee’s Cookbook has a good recipe,” Kim said, when I asked him about it.

That was when I discovered, belatedly, what is stlll the best-value Peranakan cookbook to be found. Fancy newer titles with beautiful covers and pictures don’t come close.

There, on Page 132, was Mrs Lee Chin Koon’s Achar With Rempah, version Number 2, what I’d been missing for so long.

I found a green papaya and got to work. No wonder this pickle is so hard to find, it takes at least a week of sunny days to dry the shredded papaya.

I was a satisfied man when it was done, and the chillis, de-seeded and plump with their chewy papaya centres and shiny in their turmeric-vinegar sauce, transported me back to that other time and place. 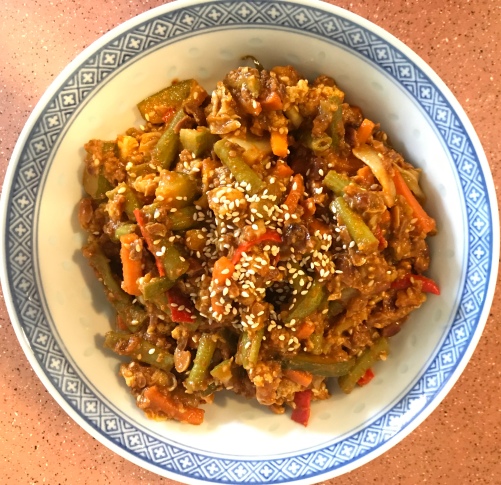 “Auntie” Berat Lee passed away on June 20, 2010, aged 88. Her son Kim cooks her food when he has friends over at his home in Melbourne, Australia. I make her Achar Awak in Singapore. (Photo of Berat, courtesy of Kim Low)

These days, when I read about how you have to book your Chinese New Year reunion dinner slot at a restaurant weeks in advance, choose between the early or late sitting, and hurry if your time is almost up, I think about those lavish spreads Auntie prepared year after year so that her family and guests always ate at her table and you never had to leave before you were replete.

Nobody dreamt of giving her bottles of cookies or boxes of cake made by other people. She made her own.

Home cooks like Kim’s mother showed that if you care enough, doing it yourself is never too tedious or time-consuming.

Excerpted from a column published in The Sunday Times on 6 February 2005 and reproduced in Good Grief, Everything I know about love, life and loss I wish somebody had told me sooner, Straits Times Press, 2016. 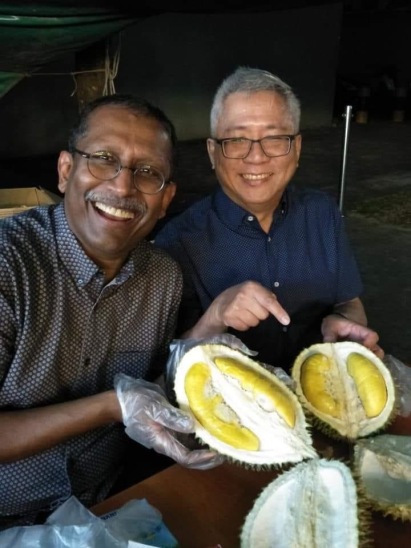 Friends for life: Kim Low and I attended St John’s Institution in Kuala Lumpur, Malaysia, from Standard 1 and through secondary school. We were in different sessions in primary school, then met in Form One in 1967. We’ve stayed good friends over the decades. The photo outside SJI was in 2004, taken by our classmate Chan Kwan Yew. When Kim visits Singapore from Melbourne, where he lives, there’s nothing he likes better than durian. I’m the one wearing gloves, shame on me, a big durian fail.