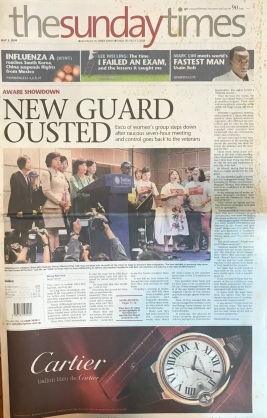 As mysteries go, this was in a class of its own.

One day in March 2009, Singapore’s most prominent women’s organisation held its annual general meeting and everyone expected it to be uneventful. Not many members were expected to turn up, and a team had already agreed to make up the new committee. It would be over quickly.

Except that it did not go that way, that day. Just before the meeting began, a stream of strangers appeared and soon outnumbered the surprised Aware members present. The new faces were members too, but did not bother to introduce themselves. Then, when it was time to elect the new committee, they contested and swept nine out of 12 positions.

It was a brazen power grab that none of the women who had led Aware over 24 years had seen coming. Now, too late, they understood the sudden spike in new memberships in the months before the AGM.

Aware’s veterans were so shocked, they said nothing in public. Strangely, nor did the group that was now in charge. There was no announcement to say who they were, why they had seized leadership in this fashion, or what they intended to do with the women’s group.

I was a senior editor of The Straits Times at the time, and nobody in the newsroom of Singapore’s main English language newspaper had an inkling that this had happened, even though many of us knew many of Aware’s leaders well.

The Association of Women for Action and Research was founded in 1985 and from the start had been outspoken on controversial issues, disagreeing openly with government policies, writing letters to the press. They were respected individuals in different fields, including professionals, senior civil servants, academics, lecturers and journalists.

Aware was generally well regarded, even if the tone used by some of its leaders as it battled male chauvinism and urged gender equality in patriarchal Singapore came across occasionally as overly strident. They could rub people the wrong way, and not everyone admired them.

I knew a number of the Aware leaders personally, including Constance Singam, the outgoing president who had been present the day the crowd of unknowns arrived and took over. About a week after the AGM, distraught and bewildered, she told me what had happened.

There were so many unanswered questions. Who were they? Why did they do this? What do they want? Each time she just replied: “We don’t know!”

It was a story that needed to be done, but it took several more days before the first news report ran, because it proved so hard to pin down facts about the new team.

Over the next four weeks, The Straits Times led the coverage of what came to be known as “the Aware saga”, with the two groups involved dubbed the Old Guard and the New Guard, and twists and turns aplenty until a dramatic extraordinary general meeting on May 2 ended with the original leadership regaining control. 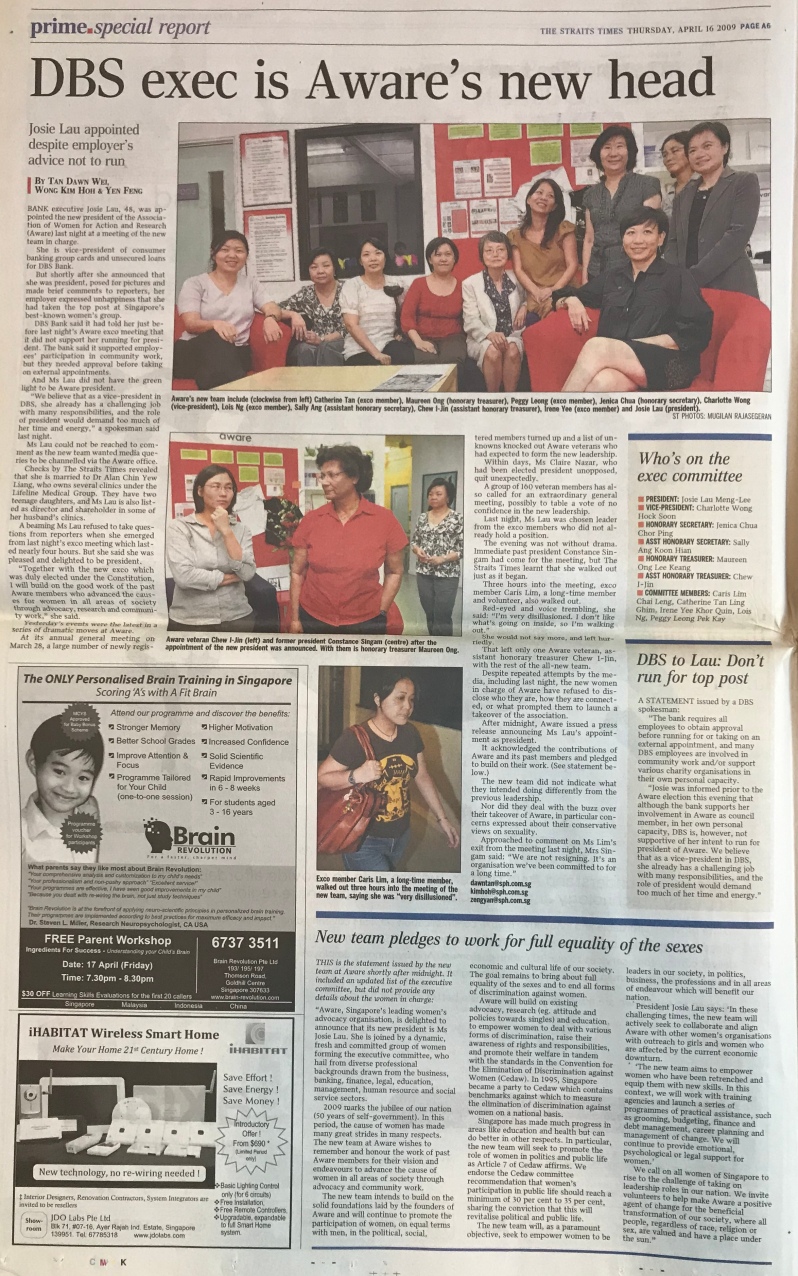 Anyone who knows civil society knows that organisations have internal squabbles, personal differences, and some leadership contests get ugly. But nobody could recall anything like the Aware power grab happening previously in Singapore. A fortnight after the AGM, there was no telling who the New Guard were, or why they had taken control that way.

It was nearly impossible for reporters to obtain any information about the new women in charge. They were suspicious, did not reply to queries, and said nothing. Within a fortnight,  the newly-elected president stepped down and was replaced by one of the others. Veteran members elected to the committee were sidelined.

Forced to dig deeper, reporters found that some of those now in charge of Aware had written to the press previously to warn against the dangers of promoting the homosexual lifestyle. The new team were all Christian, and several attended the Anglican Church of our Saviour, which had a long-running programme to help those struggling with same-sex attraction return to the heterosexual fold.

Still, the details remained sketchy until April 23, nearly a month after the takeover, when the new team’s self-proclaimed “feminist mentor” revealed herself and turned out to be a former dean of the law faculty at the National University of Singapore.

Dr Thio Su-Mien said she had been monitoring Aware for some time and in her view, it had been promoting lesbianism and homosexuality, a charge the Old Guard denied. She had encouraged the Christian women she knew to join Aware and put things right as far as the focus on family and marriage were concerned.

As the saga unfolded, a senior pastor of the Anglican church where several of the women worshipped urged the congregation to support Aware’s new leadership, saying from the pulpit: “It’s not a crusade against the people but there’s a line that God has drawn for us, and we don’t want our nation crossing that line.”

The group did succeed in getting the Education Ministry to halt a sexuality education programme run by Aware in schools, alleging that it, too, promoted homosexuality. 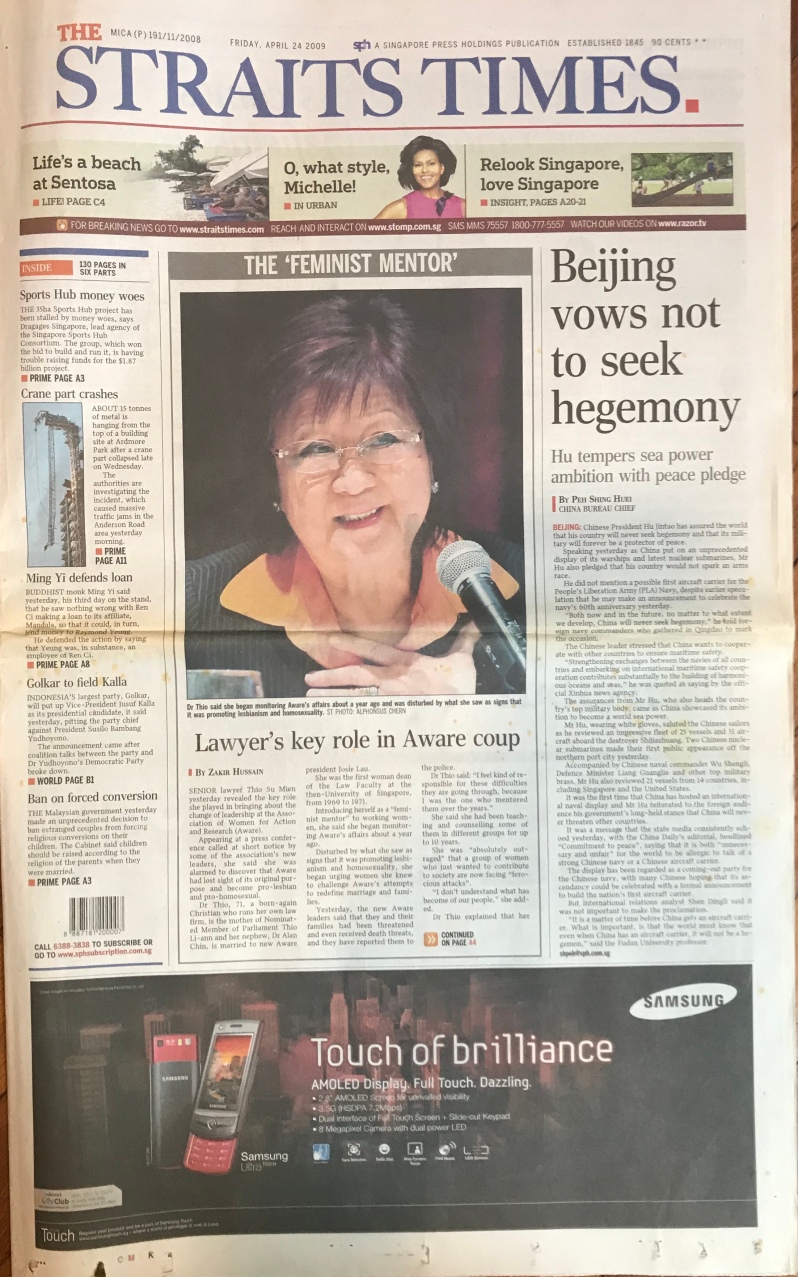 The Aware saga was a hard story to report, and journalists at The Straits Times were accused of being biased against the New Guard. But how was the paper to report their side, if they did not respond to numerous efforts to reach them? When their leader Thio finally revealed herself, she was reported in detail.

The paper’s prominent coverage of the Aware saga was criticised as excessive and “breathless”, its  journalists — and the paper itself — were accused of having a homosexual agenda.

One Member of Parliament accused the paper of exploiting the religious angle, wondering aloud in the legislature if it might have acted differently had the women not been Christian but of another faith. Although he withdrew his comments subsequently, those were serious charges in a country where media takes the greatest care with issues of race and religion. 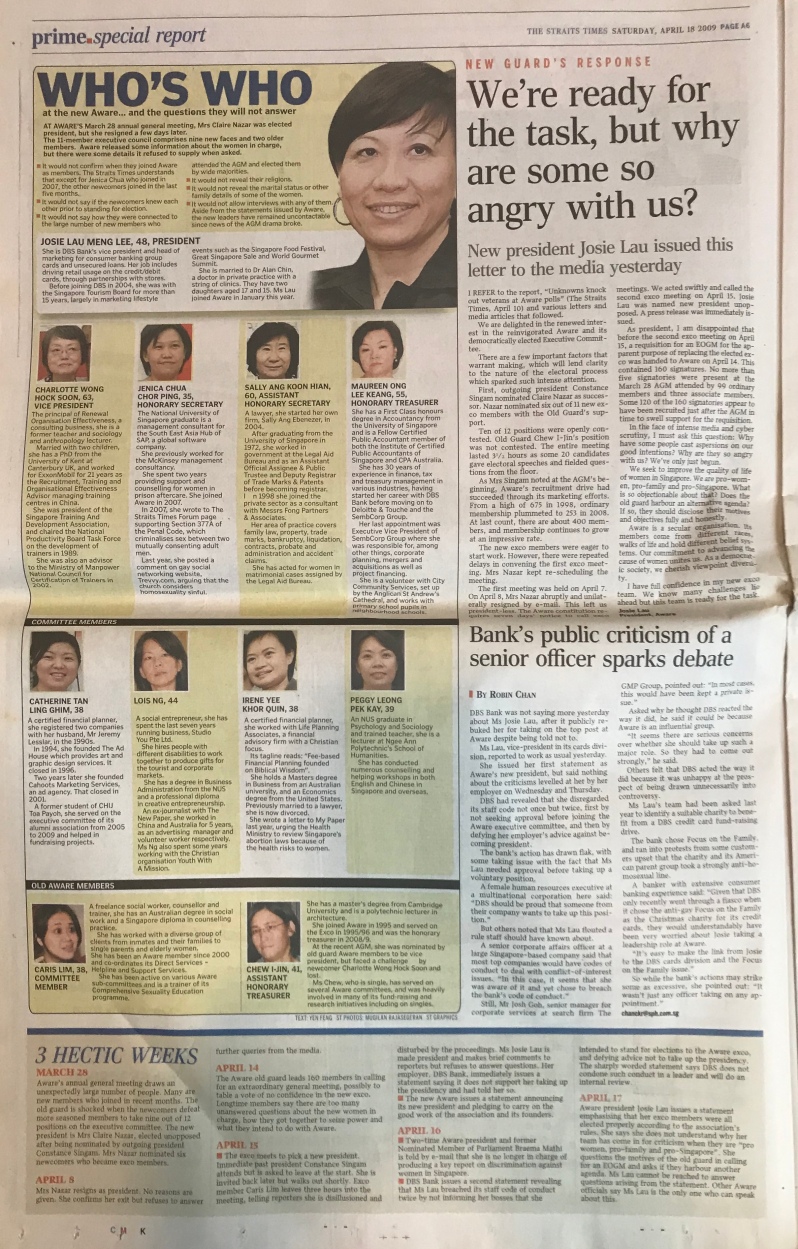 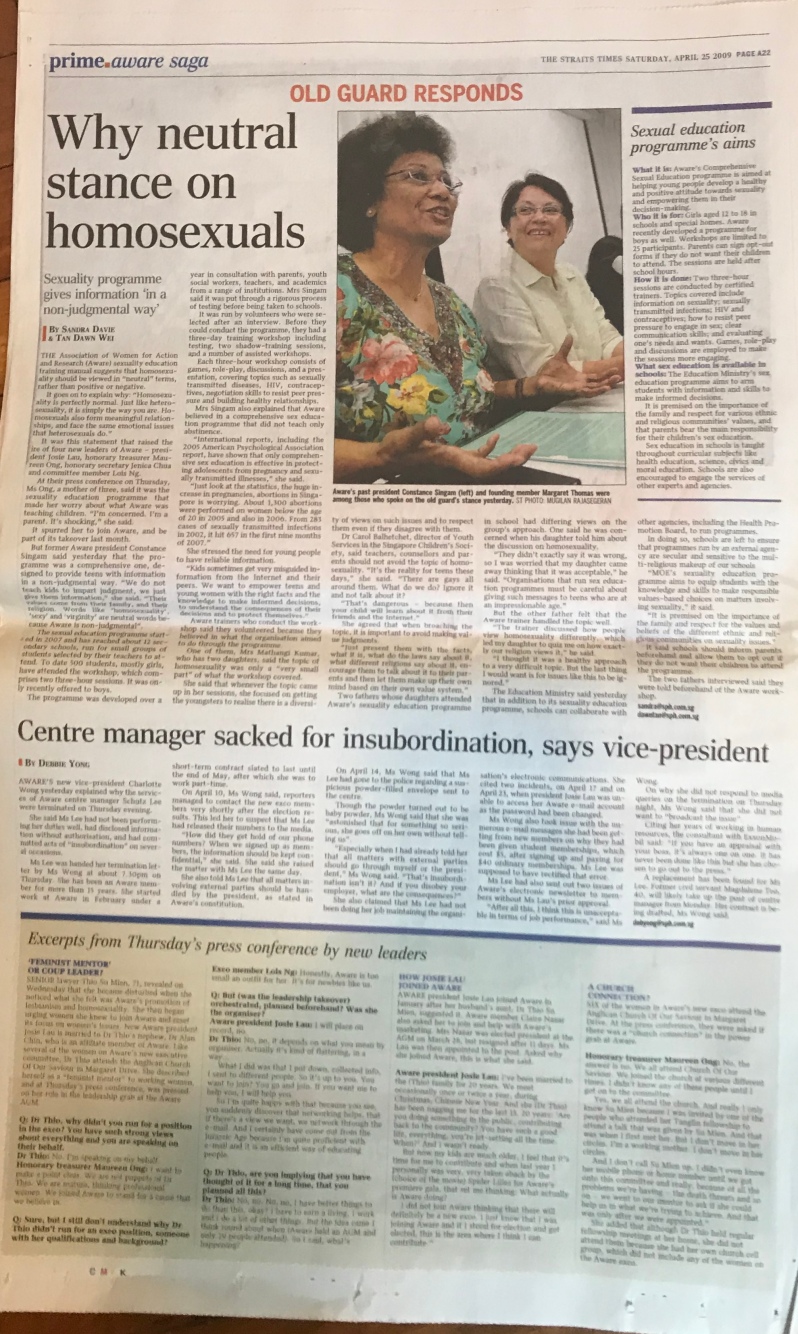 There certainly was a religious angle in the Aware saga, and considerably more. It revealed that members of Singapore’s conservative right saw nothing wrong in claiming the secular space occupied by civil society, in order to push their beliefs.

It showed that they included influential and articulate individuals, and they could muster the support needed to pull off the stealthy takeover of a legitimate, non-religious organisation.

Christians make up under a fifth of the population of 5.6 million — outnumbered collectively by Buddhists, Taoists, Muslims, Hindus and freethinkers — but they are well represented among the country’s elite.

The Aware saga was important for reinforcing to everyone that in multi-religious Singapore, there is a common space where everyone is free to be who they are, and differences will be respected.

It helped greatly that the National Council of Churches of Singapore issued a statement saying it did not condone churches getting involved in matters concerning the Aware episode, or for religious leaders to make use of the pulpit for that purpose. The senior pastor said he regretted what he did. Leaders of other faiths issued similar statements, emphasising the line between religious and secular space. 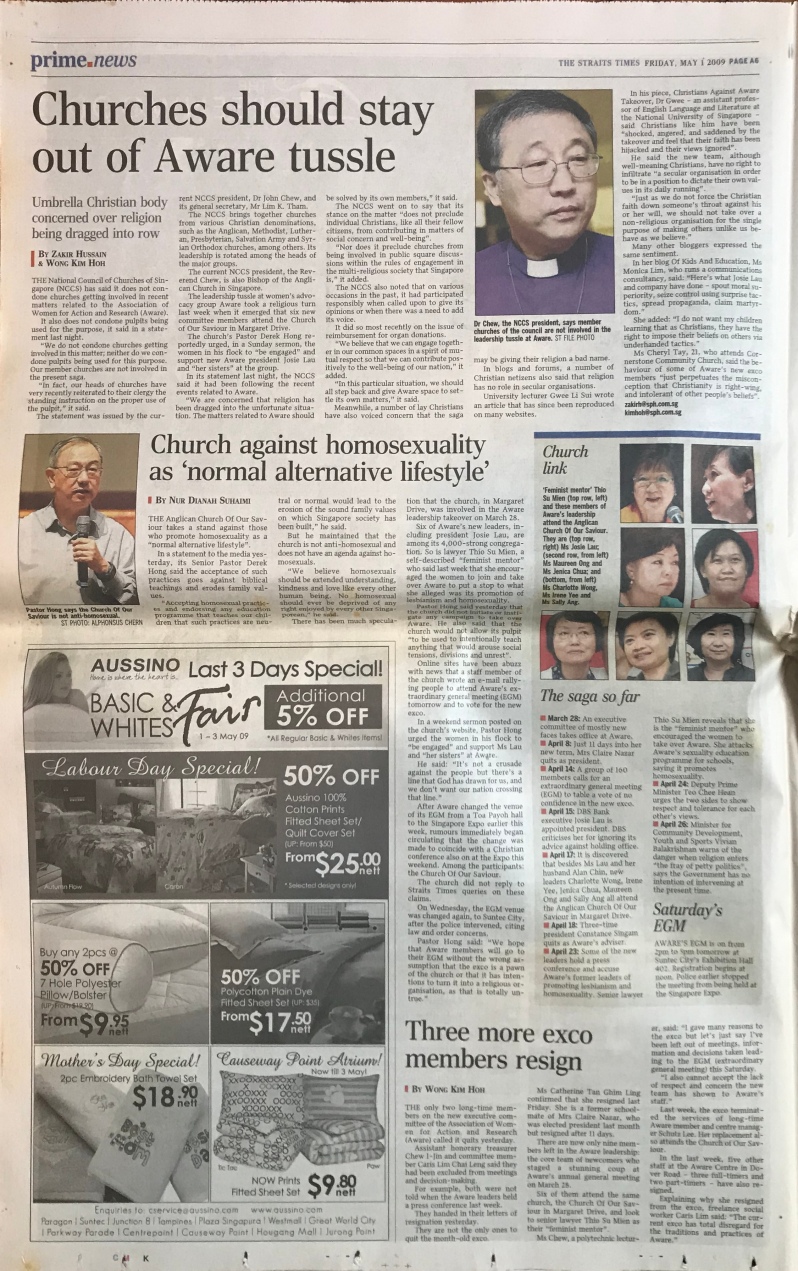 Something else happened that made the Aware saga a landmark event for civil society.

Singaporeans best known for being apathetic about civil society matters were moved in quite an uncharacteristic way. Now they stepped forward, Christian and non-Christian alike, to express discomfort and indignation that those with religious motivations would act the way the New Guard did to seize Aware.

They supported Aware’s Old Guard, signed up in droves as members and showed up at the extraordinary general meeting on May 2 where, after seven hours of speeches, jeers, boos, shouting and heckling, a vote of no confidence was passed against the New Guard. The team decided to step down, and the organisation returned to its original leaders. 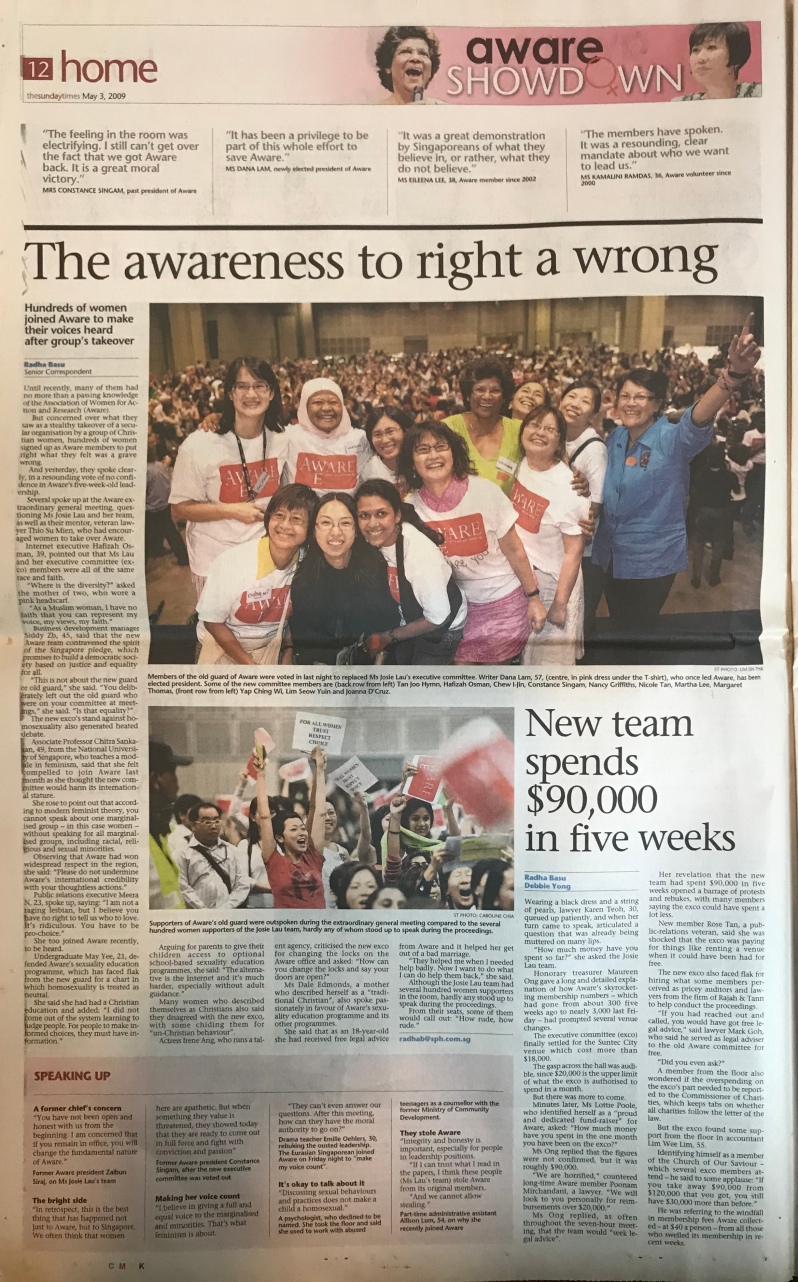 Aware marks 10 years of that episode this month (May, 2019). It remains a modest-sized women’s organisation but one with clout, and a leading advocate for gender equality. It amended its rules quickly, to ensure another power grab does not happen. The episode prompted other civil society groups to check their own rule books too, and to treat AGMs with a little more care.

Much else has changed in the way Aware is run, not least its new professionalism that relies on full-time workers and research-based advocacy, where previously it was mostly a volunteer set-up.

In the years that followed, The Straits Times would find itself scrutinised from time to time, for evidence of its homosexual agenda. When it reported LGBT changes elsewhere, including gay marriage and parenthood, accusations would resurface that it was intent on promoting alternative lifestyle choices unacceptable in Singapore.

The Aware saga revealed the clear divide between Singapore’s conservatives and liberals.

Conservative Christians remain steadfast in speaking up on issues that concern them, as they are free to do. In March this year, they persuaded the authorities to cancel a concert by a Swedish black metal band known to spout anti-Christian and satanic lyrics. The effort included a petition that attracted more than 16,000 signatures.

But when it comes to provoking an immediate and sharp reaction, nothing gets the conservative right more worked up than LGBT issues.

Singapore has an active LGBT community and its annual Pink Dot gathering gets bigger each year, but changing laws that affect it will not be easy. Gay marriage and parenthood may make the news elsewhere, but any talk of the same happening in Singapore will be met with forceful resistance from the right.

Sex between men remains illegal in Singapore under Section 377A of the Penal Code, although the law is not enforced. It is a law many regard as a bad law.

Their action sparked an immediate response, with churches coming out strongest to say the law must stay, because the Bible forbids homosexual behaviour, and repealing the law would promote and normalise an unacceptable lifestyle.

From the opposite end, pro-repeal activists and their supporters organised themselves to marshal their arguments, along with an online petition calling for the law to go. The case is still pending.

Ten years after the Aware saga, much has changed, yet so much has remained the same in Singapore.

This article was published in the South China Morning Post on 2 May 2019 with the headline LGBT rights in Singapore: gay community continues battle to be accepted, 10 years after Christian power grab at women’s group Aware.

Postscript. Apologies for the state of the pictures. I kept some of the copies of The Straits Times through the Aware Saga, and looking back, what stands out for me is that the paper pulled out the stops to cover this story thoroughly and well, and gave it the space we editors felt it deserved even in the face of questions that we were overdoing it and doing “too much”. Every time I tell this story, I say we could not have done it if the editor I worked to, Han Fook Kwang, did not agree that this mystery was worth investigating. Initially, we had no idea what happened when we reported the news of the takeover. Because Fook Kwang agreed with me that this deserved to be covered well, we devoted reporting resources, as well as pages of the paper to the saga. Another editor might well have said: “Aware? Really, how many members does it have? Who really cares what happens to this women’s group?” And that would have been the end of that. It might all have turned out another way. AJ