I was at the Singapore Zoo on Boxing Day with my friend Quek Hong Shin, and there was a long line of people coming to us to get their copies of The One And Only Inuka signed and it felt good. This is a picture book for young children about the only polar bear born in the tropics, and neither of us is famous. So these were all people who knew and loved Inuka and wanted this keepsake, on what would have been the bear’s 28thbirthday. Inuka was born on 26 December 1990 and died on 25 April 2018, well in his 70s in polar bear years.

I was happiest to see Inuka’s keepers and other zoo staff come with multiple copies because they thought the book captured their memories well. The first three copies Hong Shin and I signed, before the launch event began, were for Mohan Ponichamy, Stefan Ng and Yasmin Basir, who were among Inuka’s carers. Everybody was sad when Inuka died, but we knew the zoo team was devastated because they knew this bear from the day he was born , weighing just 350g through nearly three decades as he grew up, appeared with his mum Sheba, outlived his father Nanook, turned green from algae, then lived and appeared alone after Sheba died. There was controversy in more recent years over whether it was right to keep polar bears in the hot and humid tropics, some pressure to send Inuka to a temperate zoo, and then a decision to keep him here for the remainder of his days. 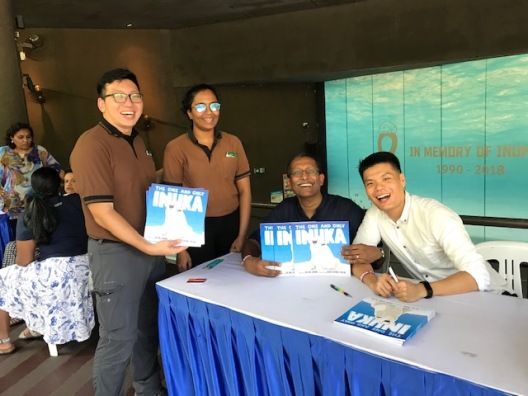 The Zoo will not bring in more polar bears, but for all of us who knew and visited Inuka over the years, he was a star attraction and delightful to watch. Stefan Ng told Hong Shin and me how he was about three or four years old when his parents brought him to see Inuka for the first time, and he ran to the viewing wall of the pool and peered in but could not see the bear. He was plastered to the wall, the way so many children were when they came there, and could not spot Inuka anywhere. “But Inuka saw me, and suddenly he swam up to me, and placed his paw on the glass just where my hand was pressed up! It changed my life,” he said. The boy grew up, joined the Zoo, and became one of Inuka’s keepers in his final years. What a lovely story. “Thank you for doing this book,” Stefan said. Those were the best words I heard on Boxing Day. 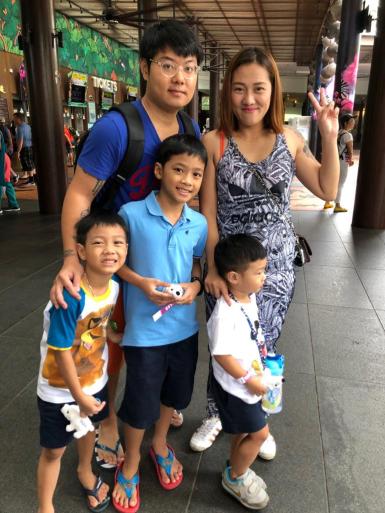 I dedicated the book to Bear Chan and Barry Pansook Lim, youngest child of my friends Lim Li Shan and Bow, who call him “Bear-Bear”. They were at the zoo with older boys Tanabordee and Brooklyn.

Hong Shin dedicated the book to his nephews Ian and Aaron.

It was very kind of Education Minister Ong Ye Kung to come to the Zoo for our book launch and I must confess I wondered why in the world any of our ministers would spend a workday morning like this. Then he went on Facebook in the evening and it made sense. He was a dad like me too, and he had visited Inuka over the years, and well, what more do you need. That was terrific to read. 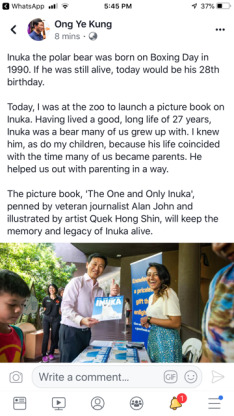 Hong Shin and I had a great morning out at Child @ Street 11 right after the book arrived from the printers. Longtime journalist M. Nirmala, who I worked with at The Straits Times for decades, started this excellent childcare centre which delivers a programme that makes children curious, outgoing and totally engaging.

Ahead of our Zoo launch, Hong Shin and I wanted to test reading The One And Only Inuka to some children, and Nirmala kindly said yes and gathered a big group to listen to us. It was a riot. We had the best time, and realised it can take too long to read a 36-page book and answer children’s questions. I didn’t expect the first questions the children asked when we finished.

Why did Inuka turn green?

Why did Inuka die?

Where is Inuka now?

Why did I not know that kids aged two to six would know how to identify the important questions right away? Nirmala told us this was only to be expected and some of the children have already dealt with grief and loss. Who knew. Who knew that Inuka might provide an opening to talk about losing a loved one, asking why, and finding ways to remember the best of him or her.

The book is a simple, straightforward telling of Inuka’s life in Singapore. Hong Shin did a great job with the illustrations. As an editor at The Straits Times, I put Inuka and Ah Meng, the Zoo’s orangutan mascot, in the paper countless times and I know some of my colleagues thought I was nuts. But Singapore’s Zoo is indisputably among the world’s best, I’m a fan, and I’ve visited it countless times over the years with my wife Hedwig and our children Nicola and Zachary, as well as with visitors. For several years through the 1980s and 1990s the Zoo was regularly in the news with new attractions and new animals, and its longtime chief executive Bernard Harrison was a larger-than-life character who always represented the Zoo in an exciting way. Unlike so many bland, invisible Singapore chiefs, he was a colourful newsmaker who was good to journalists, ever-ready with a quotable quote and zoos need people like that. I never met the man, but I admired the shamelessness with which he promoted the Zoo, because he was so sure he had something good going on in Mandai.

By the way, this is not an advertorial, or sponsored content! I’ve not been paid to say good things about the Zoo. And publisher Susan Long warned me from the day I talked to her about doing some children’s books on an animal theme that there is “no money in children’s books”. Hong Shin and I have had great support from book designer Lydia Wong, editor Lea Wee, marketing man Ilangoh Thanabalan and the rest of the team at Straits Times Press. It’s hard to sell books in Singapore if you’re not a top politician or influential civil servant willing to tell all in a memoir. The rest of us who write books do so out of vanity, and we succumb to flattery when people say: “Aren’t you going to write another book?” Hong Shin has been putting out children’s books for some time now, and has worked hard to promote his books The Amazing Sarong and The Incredible Basket (Epigram Books, 2015 and 2018), with more on the way. Hong Shin and I have a plan for a set of animal-themed books we hope to put out in 2019, in between the other things we do.

It’s funny how we ended up being partners in this Inuka book and the others we have in mind. All the years that we worked at The Straits Times, we were just “smiling colleagues”. I swear I didn’t even know the sound of his voice. But after both of us left the paper, we became Facebook friends. Then, one day, Hong Shin wrote a Facebook post about how people don’t write letters anymore, because it is so nice to look in the mailbox and find something that is not a bill or some promotional rubbish. He suggested reviving the habit of writing postcards for a start. So we became postcard friends. When I was toying with the idea of doing some children’s books, I contacted Hong Shin because his Amazing Sarong was already out. We had coffee, I showed him what I had in mind and he said sure he’d work with me. Now we’re on the cover of the Inuka book together, which is very cool as far as unlikely friendships and partnerships go. He’s a good guy. We both know Susan Long is right and there’s no money in children’s books. Ever the optimist, I keep telling everyone our day will come when we get translated into Chinese and break into the China market. I’m told my byline will be Ai Lun Yue Han, which would be an upgrade on two four-letter words. But everyone keeps telling me that if anything’s good enough for China, only the pirated copies will move.

This is how the young artists of Child@Street 11 drew Hong Shin and me. Really good!

PS: The One And Only Inuka sold 800 copies of its first print run of 1,500 in under a fortnight and in Singapore, that’s a reason to set off fireworks! It is available at http://www.stpressbooks.com.sg