It is almost a year since Mrs J and I were in Barcelona with our niece Joanne who joined us from New York City where she lives. From all the great meals we had over 10 days there and in Madrid, one stood out for the sheer delight and joy of it all. We went to Quimet y Quimet on our last night, even though this had been on our list from the start. As soon as she knew we were Barcelona-bound, my friend Siong sent me recommendations from her earlier trip and was especially enthusiastic about the tapas bar: “Must go!”

Then we kept seeing Quimet y Quimet on several of the online lists we looked at after we got there, but we delayed going because there was always some other interesting or highly-rated place nearer our Airbnb apartment, boasting some exquisite Catalan experience that was hard to resist. The marvelous thing about eating well in Spain is that you don’t pay crazy-mad prices to get great food. So we kept putting off going to Quimet y Quimet until the end of our holiday and after we’d enjoyed many superb meals.

It was still light and fairly early in the evening when we finally got to the narrow street and spotted the bodega’s red doors, and even from a distance it looked like it would be a challenge getting in. Quimet y Quimet was considerably worse than a restaurant with a queue. It had no queue. It had a swarm. There were people spilling out of the place, and when we peeked in, it was standing room only.

There was no way of telling if there was a system to the swarm. Like, were the people moving in this or that direction? Who to order from? Was there a menu? How did you get a spot at one of the tiny cocktail tables to stand up and eat at? In fact, most people just ate where they stood.

But you couldn’t help noticing that despite the crowd, it was a lovely tiny place. The high walls had shelves from floor to ceiling, crammed with bottles of beer, wine and liquor, as well as a dizzy variety of preserves and seafood in cans and jars. There was also that unmistakeable buzz of anticipation you experience only in food establishments where everyone is on a mission, aware that they are in a special place, ready to partake of the delights on offer and intent to not leave until they are sated.

But first. How to go through the swarm and reach the glass counter behind which a man and two women were working furiously, making tapas and pouring out glasses of sangria. The man – who we guess is owner Quim Perez – appeared incredibly calm and good-natured as he made dish after dish of beautiful splendidness and called out something (a name? a number?) before passing the plate to a hand that reached out from the swarm. Every plate he produced looked amazing. The colours! The olive-oil shine! The spear of a pickled green chilli for garnish! Dollops of chopped this and pickled that from bowls in front of him went onto mysterious plates of I Don’t Know What It Is But I Must Have It!

Aiyoh! How? Quit Quimet’s chaos or stay and do whatever it takes to eat here?

It is always a good thing to travel with someone from New York City, a place where people stand in line outside the best restaurants, become aggressive when determined to get in, and can be surprisingly deft in working through the toughest crowd of large people to score a table. Because while I was salivating and stressing over whether to stay or leave, Joanne – petite Joanne, who might quite easily have been trampled by that tapas-scoffing, sangria-guzzling crowd – had spotted a table that was about to become available, eased over and claimed the prize.

So we stayed. A simple card menu materialised. Impossible to tell what was what. So I went up to Mr Quim, who had a system of making eye contact with people when he was ready to take their order. As soon as he looked at me, I said: “Three people. Everything.”

He said, in a knowing sort of way: “Everything?”

And so the feast began, as he started sending us plate after plate and it was all spectacular and wonderful. The swarm never thinned but everyone else melted away as I focused on each new tapa and went back to Mr Quim for more. There were surprising flavours of sweet, salty, sour; fresh, cured, pickled and canned. There was a smoked salmon tapa that was so good, shocking with conflicting flavours of honey and balsamico, I had to check quickly that I hadn’t died and gone to heaven. 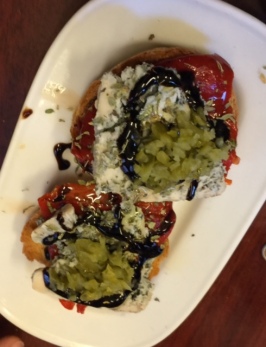 I was a happy man that evening. The sangria helped of course. Afterwards, from all the places we’d eaten at over those days in Spain, it was Quimet y Quimet that I kept thinking about for its magnificent, memorable celebration of Spain’s small plates of deliciousness, tapas. It was long after we were home that I learnt that Quimet y Quimet has been around for over a century, that it started as a wine shop before the tapas made their appearance. And it has been passed down through the Quim family to the current owner.

Several months after that holiday I was looking at the pictures in my iPhone when I had a sudden longing to be in Barcelona again, and in Quimet y Quimet in particular. I invited some people over and experimented with making tapas at home. I loved the sounds at the dinner table that night, especially after I brought out my Quimet-inspired salmon tapa.

Then when my friend Eddie was about to turn 50 for the tenth time on May 2, I offered to cook him a surprise tapas meal which would never have been if we had not stayed despite the crowd at Quimet y Quimet that night in Barcelona. The birthday boy was suitably surprised. The response from everyone at the table was enthusiastic, to say the least. So here’s what I did for Eddie, who is a great guy.

We started with Iberico ham and a crab-and-potato omelette.

My version of salmon and honey and everything else. It really is good.

Asparagus and herbed egg salad, and meatballs with almond sauce.

Topped off with a seafood paella. We had plenty of great paella in Spain, but not at Quimet y Quimet. One of the joys of travelling is bringing home the best parts of the holiday to share.

If you’re ever in Barcelona, put this on your list: Quimet y Quimet, Carrer del Poeta Cabanyes 25, 08004 Barcelona.

My friend Siong was right: “Must go!”