I spent four days in Hong Kong over the weekend and had a number of splendid meals for breakfast, brunch, lunch and dinner. Which is what Singaporeans do when in Hong Kong and our group of nine featured some serious foodies who had researched, made lists, and called two months in advance to secure a couple of reservations. But there was always room for a bowl of steaming hot noodles, and it had to be Mak’s Noodle from the little shop at Wellington Street in the Central district. I always found someone to go with me, but none so faithful as Tan Hun Hoe, who goes back more than 40 years to our days in St John’s Institution, Kuala Lumpur. The others in our group grew increasingly troubled to the point of mild disgust that we never had difficulty fitting in a bowl of wanton noodles (and suikow dumplings or braised beef brisket as the spirit moved us) no matter what grand meal we’d had before or were heading to afterwards. We ignored them of course and made the trip to Wellington Street, arriving just before or slightly after 11am, opening time.

Mak’s Noodle is so famous they have a Wikipedia entry and a story that’s been told over and over. But I never knew them until they arrived at Centrepoint on Singapore’s Orchard Road and the first time I walked past the shop and got a whiff of the soup they serve with their wantons, dumplings and soup noodles, I was hooked. Even though people hooted saying it cost too much, the servings were too small and really, there’s better noodles to be had in many other places. But I am Mak’s boy. And Hun Hoe was hooked on Mak’s too. We were in the shop so early one day we had to wait for the ageing waiter to open the shop, lay out the red welcome mat and place a pot of money plant just so on the ledge outside. Then they let us in and you cannot take this personally but nobody smiles at you. They just let you in and sit you down, take your order, serve it and let you go.

As soon as we ate our first bowl together, Hun Hoe and I knew it all went back to our childhood, and if you insist we be specific, to Petaling Street in Kuala Lumpur’s Chinatown where we downed many bowls of Cantonese wanton noodles through our childhood and youth. Mak’s Noodle was our boyhood in a bowl, each mouthful transporting us to another time of our lives. But more than that, at this shop, the noodles are the main attraction. They are fine, long, firm and have a mystifying crunch when you bite into them. The soup is spectacular too – light, tasty, full of goodness. You could have plain noodles in soup and that would be a hugely satisfying meal. But I’m not nuts. Of course I have my noodles with wantons, or Mak’s richly flavoured chunks of braised beef brisket with a delectable hint of lemon peel. On our last trip there,  Hun Hoe and I had noodles with both wantons and beef brisket and it was a splendid way to say farewell to Mak’s Noodle until the next time. I cleaned out my bowl in eight minutes, though if rushed I could do it in five.

The staff at Mak’s Noodle work really hard. We watched the man sit at a table and fill shrimp wanton dumplings in record time. He did not waste a moment making a dainty dumpling, he just had a way of scrunching the filled wrapping in his fist before tossing out a perfectly done dumpling. Later he moved to his chef’s station to start turning out endless bowls of deliciousness. I don’t know what they put into the dumplings that make them so good, with enough bite, the shrimp filling so fresh and crunchy with a flavour I don’t know the source of except that it too takes me back to Petaling Street. The  next day the same chef was at work over steaming vats in his tiny workspace in the shop window. He let me take a wefie with him and Hun Hoe but never smiled. He must have been thinking “Stupid Tourists!” But never mind, I was happy with my photo and full of respect for him for keeping up a tradition dating back several decades. It was not yet noon and he had piles and piles of bowls within reach and would probably dish out hundreds of bowls of noodles before his work day was over. 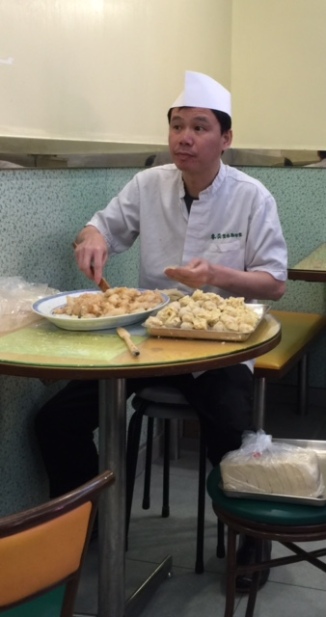 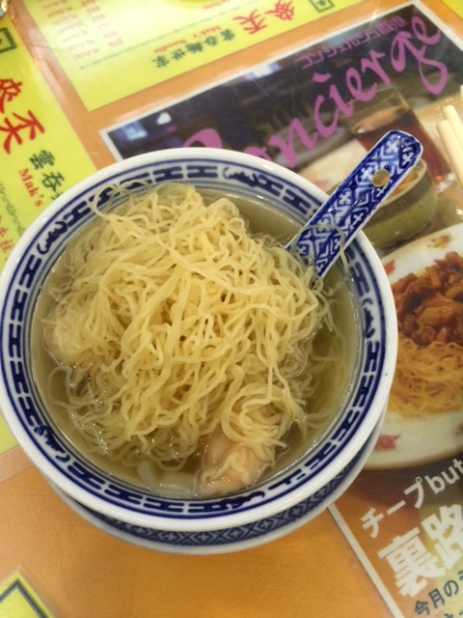 We returned to Singapore on Monday night. At 11am on Tuesday I thought for some reason: “Mak’s Noodle is opening now on Wellington Street in Hong Kong.”

So I Whatsapped my travelling companions, and I added: “Anyone game for a 2.30pm snack of Mak’s Noodle in Centrepoint?”

Maybe I was kidding. But Hun Hoe replied: “See you there.”

And so at 2.30pm on Tuesday March 1 the three of us were tucking into wanton noodle soup with side dishes of braised beef and steamed kailan with oyster sauce. We finished our noodles before we could complete our comparisons with Wellington Street, so we each ordered a second bowl.

So here’s the verdict: The noodles in Singapore come very close to the noodles in Hong Kong. The wantons are not filled as full and round as there, and there’s too much wanton skin flapping about like goldfish fins. It’s tasty enough but something is missing – that mystery taste of Petaling Street is just not there. The soup was good enough to finish but fails the full-bodied flavour comparison with Hong Kong. The braised beef brisket was delicious, but there was none of that pleasing hint of lemon peel. The kailan was limp, fail, fail, fail. But if it’s too far to get to Hong Kong, it will have to do. I still like it, though perhaps less than before now that I’ve had the real thing.

That’s how I had five bowls of Mak’s Noodle in four days. Hun Hoe tells me we should try the Hong Kong chef who does wanton noodles in Upper Thomson Road and see how it compares with Mak’s Centrepoint and Mak’s Wellington Street.