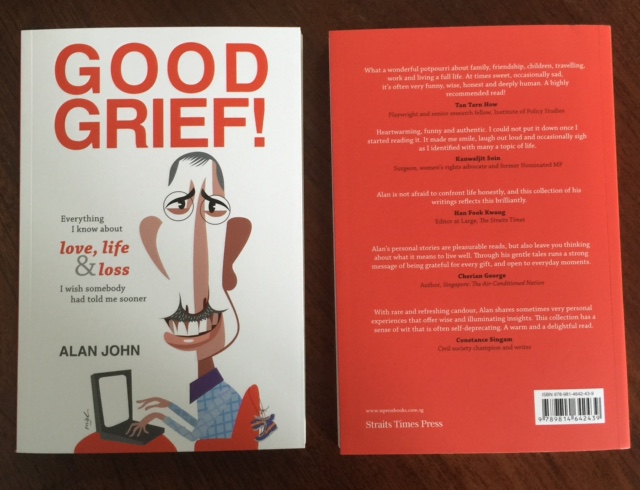 The book went on sale this weekend, and friends who went in search of it on Saturday reported that either (a) they could not find it or (b) it was tucked away someplace and bookshop information staff couldn’t tell where it was. Well I needed a reality check, it’s a book not a new doughnut and I’m not famous! Interestingly, the big Kinokuniya bookstore at Ngee Ann City has it among the “enrichment” titles of self-help books.

Woke up this morning to a big splash in The Sunday Times, an It Changed My Life profile by the one and only Wong Kim Hoh, as well as a page of content from the book – a 1982 story about how Hedwig and I celebrated our first wedding anniversary plus some new bits from the back of the book on What I Know Now. Kim Hoh calls my attending St John’s Institution in Kuala Lumpur a game-changer in my life, and that’s right. I spent 13 years there, and that proved the longest period of stability after a tumultuous early childhood following my father’s sudden death.

SJI had none of the resources that even neighbourhood schools in Singapore have today, but everyone had a chance of discovering something he might be good at – from rearing tropical fish to acting in a play or photography or helping out in the resource centre that catered to the blind students in the school, let alone the glamourous sports and other extra curricular activities. I was the unlikeliest choice of head boy, but that happened too. All of it mattered, though I never realised how exactly, in the years that followed when I would do some crazy audacious thing and wonder whatever made me leap off the cliff like that. I describe some of it in the book.